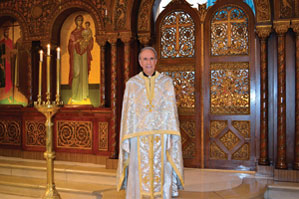 Fr. Bacalis was born in Norfolk, Virginia, to Greek-American parents George and Connie Gretakis Bacalis. He attended and graduated from Granby High School, The University of Virginia, Saint Vladimir's Orthodox Seminary, and the Ecumenical Institute in Bossey, Switzerland. He served as Director of Youth Ministries at the Holy Trinity Greek Orthodox Cathedral in Charlotte, North Carolina, where he met and married his wife Vivian Couchell. They have been blessed with two daughters, both of whom are now married and have blessed Father and Presbytera with five grandchildren.

Ordained as a Deacon in his home parish in 1971, Fr. and Presbytera spent a year in Greece where he served in an Athens parish and in the summer as Assistant Director of the Ionian Village Program, where he was ordained to the Holy Priesthood on the Feast of the Transfiguration. Upon returning to America, Father began his first ministry in 1972 at the Saint Nicholas Greek Orthodox Church in Jamestown, New York. When the opportunity presented itself to return to Virginia in 1976, he began a twenty years pastorate at the Holy Trinity Greek Orthodox Church in Roanoke, Virginia. While there, he served as a contract chaplain at the Veterans' Administration Medical Center and served a term as President of the Roanoke Valley Ministers' Conference.

In 1996, he was appointed Dean of the Saints Constantine and Helen Greek Orthodox Cathedral in Richmond, Virginia. In additional to his parish responsibilities, he serves as Regional Vicar for southern Virginia on behalf of His Eminence Metropolitan Evangelos of the Metropolis of New Jersey. He also serves as Spiritual Advisor to the National Forum of Greek Orthodox Church Musicians and the Eastern Federation of Greek Orthodox Church Musicians. He is a member of the Co-ordinating Cabinet of the Virginia Council of Churches and of its Faith and Order Commission. He is part of the Chaplaincy Staff at the University of Richmond as Spiritual Advisor to the Orthodox students. He has previously served as Treasurer and President of the Archdiocesen Presbyters Council as well as a member of the Archdiocesan Council.

Notable Awards:
1990 Brotherhood Award from the National Conference of Christians and Jews
2014 Faith in Action Award from the Virginia Council of Churches
2014 Induction into the Thomas Jefferson Society of the University of Virginia